Sometimes I see something on Pinterest that I absolutely love.  Such was the case when I saw this image here:

I pinned this pic originally for the dresser.  I just love this coral colour and the new hardware really makes it fabulous.  But when I looked at the full article on Destiny’s blog, it was actually a post about the confetti wall behind it!  I liked the idea of the dots a lot and had seen other pics of walls with gold dots or other vinyl decals on them but they were all with dots spaced at regular intervals.  It’s a lot more work when you have to measure things out very carefully. Looks good though, doesn’t it?!

These are from Down That Little Lane, or you can find a bazillion stores on Etsy that have them cheaper!

Anyhoo, about the same time I was liking these dots I also pinned this DIY tutorial for a lamp makeover:

I love this lamp and also the picture behind it!  So I thought I would combine the two ideas together and paint a ceramic lamp but do confetti dots on it instead of brush strokes.

To start me off, I needed a lamp. I searched EBay for weeks to find a gourd shaped lamp like the one above, as I really love that shape of lamp. But unfortunately, so does everybody else!  They were not cheap enough to buy for a project that had the potential to completely stuff up the lamp.  But eventually I found this little lamp for $10 and the guy even lived in my suburb and actually dropped it off to me! 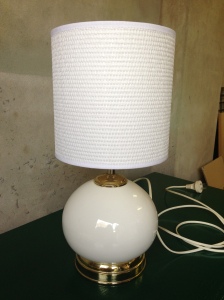 You can’t really see in the pic above, but the gold parts of this lamp are in pretty rough shape and it’s that really brassy gold that I am not a fan of.

First I removed the bulb and shade and taped off around the lamp to cover everything that wasn’t gold. I wrapped the cord and the ceramic in foil to protect it and ended up with this:

Then I sanded the brassy bits as best I could. The top part was really easy to do and the splotches came off easily.  The bottom was much trickier given the little lip it had – I really couldn’t seem to get the sand paper in there properly.  I did what I could though and then wiped all the dust off.  I then sprayed with a spray primer followed by my trusty White Knight gold spray paint!  The top part came out really well but the bottom, whilst a million times better than what was there, isn’t absolutely perfect.

Finally it came time to decorate! I bought some sponge dabber brushes at the local craft store for a few dollars.  Martha Stewart calls them pouncers I think. No one in the craft stores here knew what the heck I was talking about when I asked about pouncers though.  This is what I mean:

I unwrapped the lamp and cleaned the ceramic part. Then I just sprayed my spray paint into the lid to create gold “paint” to put the sponge into. 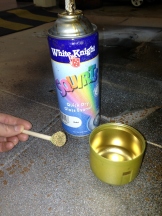 I dipped the sponge in and dabbed it on the ceramic lamp.  Instead of confetti, I decided that bubbles would actually be a better pattern to try to mirror on such a small thing as this lamp.  I did more at the bottom of the lamp and reduced the number of spots as I went up.  Not sure you can really tell though as the lamp is not very big so the pattern doesn’t really come out.  So here is what I ended up with: 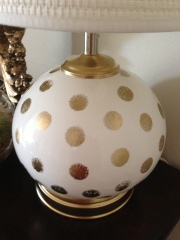 The spots are much less defined than the vinyl decals used on walls – I think they look a lot like the effect you get when you have gold embossed onto paper.  And here is the final ‘after’ shot! 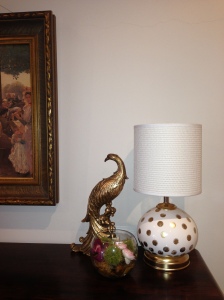