I recently was lucky enough to win some beautiful Lulu DK gold temporary tattoos. I think I was one of only a few people who knew about the competition actually, so the odds were stacked in my favour 😉  It’s great when you find starting up businesses early and they have a competition!

Anyhoo, I won these gorgeous gold tattoos.  Here is a promo shot from Lulu DK of their tatts:

Beautiful, huh?!  But of course, being a temporary tattoo, they don’t last for long.  This got me thinking of what I could do with them that might allow them to last a little longer.  I picked up a simple glass bowl at IKEA in the kitchen section. I am pretty sure it was the Blanda 5″ glass bowl that is US$3.

Yes, I am such a big spender!!  Seriously though, I had no idea if this was going to work at all so I didn’t want to go for something expensive or big.

I cut out a bunch of the tattoos that I thought would be easy to do a design with.  I went with the simplest ones as I wasn’t sure how easy a larger tattoo with fiddly bits would be to apply.  Turns out it is actually quite easy so I might do another one using some of the larger designs.

Lulu DK tattoos, cut up and ready to apply

I just peeled off the clear layer on the top of the tattoo strips and wrapped them around the bowl in a random criss-cross pattern.  I kept them about 3-4mm away from the top rim of the bowl so that the clear coat of Mod Podge would be able to seal it off completely.  I had to do it in layers as I obviously couldn’t lay one over the top of another until I had wet the tattoo and removed the paper from the lower layer.  It was a really quick process though.  Very easy – the paper only stuck on a few little spots but was easy enough to gently peel off with a fingernail.

After I let it completely dry for a couple of days, I decided that it was definitely going to need some sort of clear coat.  I had recently gotten my grubby little hands on some dishwasher proof Mod Podge so I thought I might as well give it a try.  First, I had to use some rubbing alcohol, as per the Mod Podge instructions.  I used the alcohol on the glass surface, but not on the tattoo parts. I didn’t think it would survive it!  Then I just used a small paintbrush to cover the outside of the bowl in a coat of clear Mod Podge.

Now, this is where the learning part comes in. Mod Podge doesn’t dry completely clear on glass. It gives it a cloudy look.  Armed with this knowledge, I am keen to try this again on a ceramic bowl to see if the Mod Podge comes out better.  And I might try it with some of the bigger tattoo designs now that I know how easy they are to apply!

Back to this project though. Last step was to let it dry thoroughly!  I chose not to do more than one coat as I think it would get more cloudy and I wasn’t keen on that happening. Here are the final results for my tattoo wrapped glass bowl: 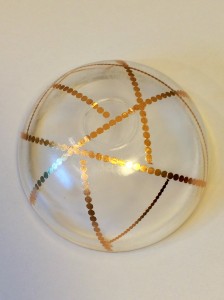 This shot here shows the cloudy look of the finish a bit better: 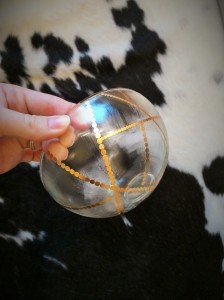 And finally, here it is as it looks as a display bowl, which is what I intended it to be. Despite the Mod Podge being dishwasher safe, I think since this has only one coat that it will be hand wash only at best!

If the ceramic bowl turns out better, I think it could be really cool to get more traditional temporary tattoos (your “I Love Mom” style ones) to decorate a coffee cup or something.